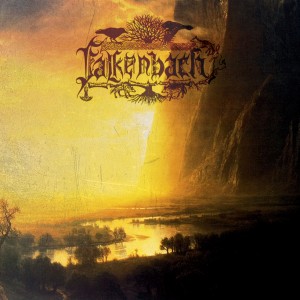 Once a mighty king ruled in a northern land
his enemies he fought with steel and iron hand.
So many tales were told, his name a glorious sound,
“god-like he is” they said, and by no Christian laws was bound.

Long ago in a northern land…

One day they came across the Nordic sea,
the man of the cross and camped beside a tree
which was called a sacred one for all thy heathen hearts,
where sacrifices were given to their northern forefathers
Gods…

The elder and wise men amongst them
watched distrustful to all those
of the foreign men with their swords in hand
.. and the mighty tree was felled…

Some days gone by and the elder men disappointed,
they found a grave with a wooden cross upon.
So they all gathered at a place near the sea at night,
they all sat around their king, and a campfire gave its light…

First words were spoken by a maiden of great beauty,
she whispered silent words to Freya and began to speak.
Her iceblue eyes filled with tears as she told them all what happened
in the woods three days ago when two Christian men raped her body…

Many people told what happened and what was done by the Christian men;
a girl was burned and three farmers died, nine children were never seen again…

The king drew his sword and saddled his black horse,
they gave a sacrifice to Odin and to Tyr, the Gods of their war,
that might before the morning of…
REVENGE!!!

The stars were shining from a dark black sky,
their swords reflected the light of the moon,
their torches burned red, the flames blazed up high,
the hour of their raid will come soon…

As the sun at last arose crimson, beyond the Nordic sea,
they all stood in armour, with helmet and sword,
and with certainty of what was forever will be…

The bells of the Christian churches tolled,
woke them up so much to late,
two ravens high above watched this bloody deeds
when the steel becomes their fate…

After hours the most of the Christian men
by the Norsemen all were slayed,
the sun high above was shining bright
that day of heathenpride…